Now for Grace! I did not get her for Christmas but I saved for her all of December. We were in the area of our store on the 6th so I got her. Grace goes to pairs in her story and loves baking.

She has a really cute meet outfit. The outfits keep getting more modern, Lindsey the first girl of the year had a skirt this short but it had leggings under it. I know my mom would not let me wear that skirt without leggings under it. 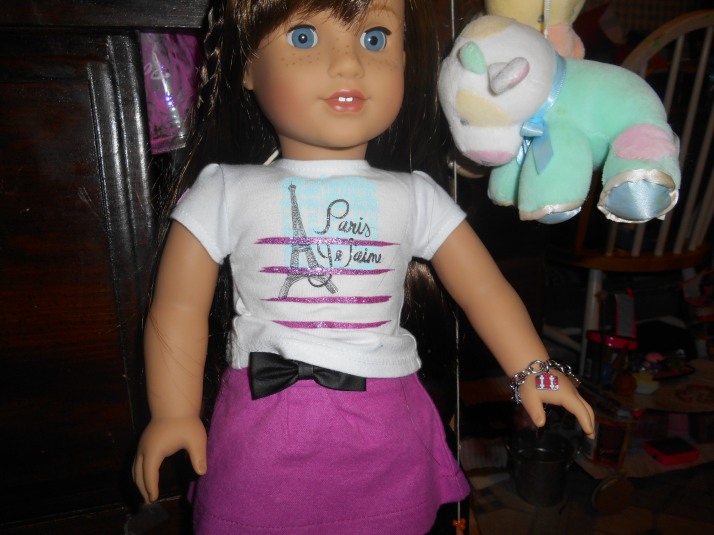 Her shirt says Paris Je Jame (I think) and has and Eiffel tower and sparkly pink stripes.

Her skirt is felt like materiel and has a black bow on it.

Her boots have a strip of cloth with on it that is attached to the boot on the side.

From left to right the charms are an American girl charm, Grace’s french bulldog, (Bonbon) A travel suitcase, a macron with a bow on top, an Eiffel tower,  a post card, and a heart with Paris in it. The bracelet hangs nicely, it was a little hard to get on at first but has gotten easier.

Grace has freckles, side swept bangs, and  a braid on the side. Her freckles cover her nose and under her eyes and her bangs are a little poofy but they work. Her brown hair has different shades of brown in it and it really shines. Her lips are darker then most of the other dolls but they look nice.

Grace is a awesome doll and if you have the money you should get her. Her only flaws are that there is a piece of hair longer then the rest of the bangs, and her shirt covers the bow on her skirt if you don’t put it around it.